It was the first evening of a host of college classes to come, a course in American History, Past and Present .  I don’t recall American History being a course-subject in middle or high school.  Therefore, I had a very skeptical attitude about my ability to comprehend and successfully pass an untrodden subject matter.  All of this came with the territory—the new environment.  Anyway, at that time it wasn’t a subject of high interest, only a reluctant elective that had won the battle of choices between three or four other undesirable courses.  My thoughts wondered how I would fit in.  I mean,  if I needed any subject-related help from any of my soon-to-be classmates, would they gallantly come to my rescue?  Sheesh, after all, I’m in my fifties and I haven’t taken a college course since before graduating with my AAS degree in 2001.  Can you imagine the level of uncertainty or anxiety felt?  Ugh, I also remembered the churning movements from the unwelcome stomach gas too. Nervous you think? 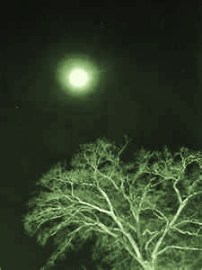 Anway, it was a bitterly cold and breezy night.  Alone, I hurriedly walked along the winding campus pathway that led to the building.  The campus’ circumference didn’t reflect much light, aside from my pocket flashlight guiding my foot steps, and the brightly lit moon shining upon me resembling the likes of a football field’s spotlight.  The moon was my arc of safety, a gentleman escort safely leading me to my destination.  Every night for an entire semester while in route to that class building, the brightly lit moon reminded me of the pillar of cloud by day and pillow of fire by night.  Father God specifically designed those pillars to maintain comfort, and to provide protection for Moses and the Israelites during their wilderness journey (Scripture reading: Exodus 13:21).  As well,  those pillars represented the presence of God. I had finally arrived at my destination and felt somewhat secure and relieved when I entered the warmth of that toasty building.  Nonetheless, I was on the verge of experiencing in a totally new environment of strangers, various levels of uncertainty.  And that made me feel uncomfortable.  In line with my feelings, communication theorists who study the Uncertainty Reduction Theory (URT) asserted,

“[U]ncertainty exists whenever the number of possible alternatives in a given situation is high and the likelihood of their occurrence is relatively equal.  Conversely, they say, uncertainty is decreased when the alternatives are limited in number and/or there is an alternative that is usually chosen.”¹

Seated in the foyer were a few students.  They were much younger than I, and that made me feel a lil uncomfortable. I thought: they weren’t my peer and it’s possible that being around them, twenty plus year olds, we may not have anything in common.  For a moment, they glanced up at me for what seemed like minutes.  Strangely enough, I did feel awkward.  Nevertheless, out of courtesy, I in passing greeted them with a slight smile and nod of the head.  As I made my way to the elevator to get to the second floor, the beat of my heart increased; as well, the cognitive uncertainty grew worse and my adrenaline rushed. I was nearing the floor of my classroom. “Ding,” went the high-pitched sound from the elevator when it stopped on my floor.  More beads of sweat rolled off of my brow.  And there was enough moistness of sweat in my hands that could saturate a hand towel.

Once off of the elevator, I surveyed my surroundings in and outside of the classroom.  For example, I looked for trash receptacles in the hallway, other things or obvious signposts that led the way to the restroom.  In weeks ahead, those objects would become my directional landmarks serving as guides.  Ok, roooom nuummberrr, there it was—my classroom.  After entering the classroom, I looked slightly ahead pinpointing which numbered seat I would be sitting in.  But from my immediate peripheral vision, I saw to my left a young lady already seated.  She appeared to be about my age, my peer.  “Phew,” that was a relief and it caused my uncertainty to reduce because I believe I could better identify with my age group.

Days and weeks went by and the icebreaker sessions at the beginning of class grew gradually less.  Subsequently, those icebreaker introductions ceased.  My classmates and I began to interact and engage in reciprocity of disclosure.  Initially, we without doubt were very unsure of what to think and how to behave towards each other.  That’s normal and common.  Overtime, the invisible reduction of my uncertainty decreased as I’m almost certain my classmates’ did.  I sensed the verbal and nonverbal communication as less intimidating.  The next thing I knew, I was comfortably sitting in groups with other students of various ages, nationalities, cultures, and a few were in the military.  The act to reduce the uncertainty about other people or my new situation while seeking ways to make sense out of my [new] environment dwindled.  Every semester thereafter, the uncertainty reduction would return.  However, my environment—the campus became less uncomfortable.  As for the decrease in uncertainty reduction concerning my classmates or professors, interacting, and or engaging with them made it a whole lot easier.

By the way, the subsequent classroom assignments which called for teamwork increased my prediction about my classmate’s behavior.  To add, in September 2009, I successfully passed the American History, Past and Present course with a very good grade.

Error: Twitter did not respond. Please wait a few minutes and refresh this page.

You will be enriched with godly inspiration, genuineness of spirit, encouragement and provocative thinking. For any and everyone who enjoys reading. You're invited to peruse and make yourself at home. Be blessed!!